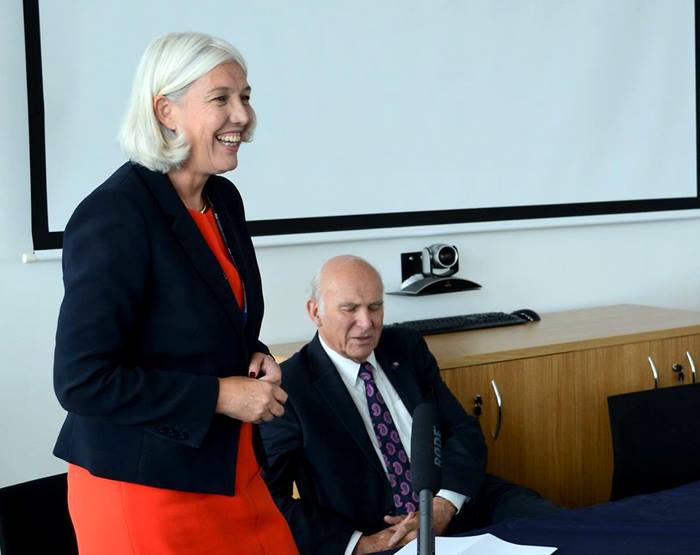 In opening the event and welcoming the 150 guests, Liberal Democrat members from across the West Midlands Beverley Nielsen, Chair, West Midlands Liberal Democrats observed some of the aspects about our new leader, Sir Vince Cable, that set him apart from others in the political fray. You can read more about Vince's visit, on the Regional Website.

“Sometimes there is a voice that cuts through. You don’t have to be the most informed person to see it or to hear it. And that’s what we have with Vince. An authentic, sincere, well-meaning voice.

“Because we all know that with Vince it is about our country’s best interests and our people’s best interests. Always speaking with these at the core of his words and actions.

“‘Enigmatic’ is the word the BBC chose in describing Vince…’not given to emotional outbursts or shows of passion.

“A contemporary of the likes of Ken Clarke, Michael Howard and Norman Lamont - some of the Tory "big beasts" of the 1990s - while at Cambridge University.

“In the West Midlands so long overlooked and coping with a growing legacy of inequality and exclusion, we are especially heartened to see your manifesto flag up the ‘fair free and open’ core of the liberal values at the heart of our party.

“Wikipedia says of you – ‘the conflict between big ideas - rather than the day-to-day grind of politics - seems to animate him most’ and your manifesto seems to back this up.  You state:

“The House of Commons is unrepresentative and tribal. The Lords are chosen by patronage, not the people. The party funding system gives wealthy people undue influence. English local government has been nationalised, creating the most centralised system of government in the Western world.”

Do we take it you don’t think the Mother of Parliaments is working? Or even fit for purpose?

“We agree that the hugely-centralised nature of our political and economic management is damaging. We agree that enlightened entrepreneurship lies at the heart of renewal in our communities, in our public services and education as well as through our economy.

“We need in our region, a long-term cross-party approach.
We are proud of your achievements in government on our behalf – when as Secretary of State for Business, Innovation and Skills, following the financial crisis from which we still struggle to recover, you “reformed the banks and created the world’s first Green Investment Bank and the British Business Bank.” And much more besides.

“If ever we needed our voice to cut through it is now. We need and want to secure electoral success at all levels of government – especially in the West Midlands where we have no MPs and a big challenge to re-establish ourselves where we once had.

“We want to recruit more members, run campaigns to make our country more liberal and more democratic. Your concerns speak to us, to our hearts as we sit here in the heart of our great country.

“Show us the steps Vince – as you did not so long ago on Strictly(!) and we will do our very best to follow. But above all, let’s start winning, focussing on winning and helping all in our winning team.”