Mike Goodfellow-Smith (past chair of Malvern Community Forest) launched ‘Malvern’s Marvellous Trees’ as a charity (awaiting registration) in 2018 having moved to Malvern from Leeds in 2012.

Having moved with his wife, Julia to Barnard’s Green, Mike observed the mature trees along Avenue Road being ‘topped’ to allow double decker buses to move up and down and noticed that several spaces had appeared along the avenue where the trees had died and had not been replaced with younger saplings.

His interest rapidly expanded from Avenue Road to the whole town and luckily for him he found out about the ‘Great Malvern Route to the Hills’ at a time when they were able to provide some seed investment through Heritage Lottery Fund to help Mike develop new routes around our town enabling residents and visitors to view Malvern’s Marvellous Trees.

Through this investment Mike was able to bring together a growing band of volunteers sharing his passion for our trees. Together they helped create four new routes to walk around our town whilst learning about and enjoying Malvern’s leafy promenades. Supported with superb tree photography by Jan Sedlacek.

“It’s fantastic to be able to launch our four new guides highlighting the tremendous variety of species we have here in Malvern. What people don’t realise is that right in the heart of Malvern we have the country’s finest urban arboretum. Planted in the 1800s by a group of town visionaries and architects they bequeathed to us something beautiful for every single one of us to enjoy every single day.”

Mike is now concerned that we are able to pay it forward for coming generations by displaying the same generosity of vision as our town forebears.

“I am so keen to help raise the profile of this work by Mike and his colleagues at Malvern’s Marvellous Trees in highlighting Malvern’s position in hosting the country’s finest classical Urban Arboretum. I know everyone who lives here is very conscious of our beautiful place and in Malvern Hills District Council it has, and will remain, a focus for development. If we are able to offer an additional destination to the 550,000 visitors to Westonbirt Arboretum each year this could assist in drawing vital visitor numbers into our Town to appreciate our wider visitor offerings.”

“I would like to see Malvern Hills aiming to be the smartest and greenest place in England, building on our wonderful heritage by drawing on the smart people living here to develop our own living legacy for generations to come. As the old Greek saying goes, ‘A society grows great when people plant trees whose shade they will never sit in.’ It is this spirit we need to capture and build on for the future.” 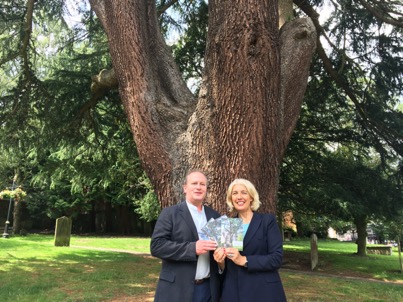